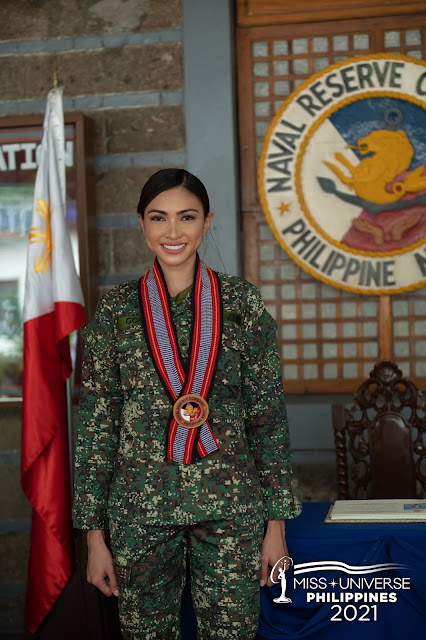 Before becoming Miss Universe Philippines 2021, Sgt. Beatrice Luigi Gomez was a Philippine Navy Reservist. The spirit of volunteerism was very strong in Gomez. Shortly after winning the Binibining Cebu crown, the pandemic hit the world. While many would have been satisfied, Gomez said, “One of the reasons why I joined Reserve Force, when I won Binibining Cebu I wasn’t able to do much. They wanted me to be safe because it was the start of the pandemic. But I felt I could no something more and help. So I channeled my efforts to becoming part of the Philippine Navy Reserve Force.”

Fittingly, her first courtesy call was with Rear Admiral PN Commander Dorvin Jose Legaspi at the Headquarters Naval Reserve Command in Intramuros Manila. He applauded her volunteerism and becoming an inspiration to so many young people in possibly becoming navy reservists. She was given several gifts and plaques of appreciations for her achievements. Most importantly, she was promoted to the reservist rank of Sergeant during her visit

Shortly after, she was off to the Philippine Navy Headquarters, Naval Station Jose Andrada, Manila to pay a courtesy visit to Flag Officer in Command (FOIC), Vice Adm. Adelius Bordado. In their official press release, “Navy Chief Bordado lauded Sergeant Gomez on behalf of the organization whose recent feat also brought honor and pride to the Philippine Marine Corps and the Philippine Navy as a whole.”

Gomez then proceeded to the Fort Bonifacio where she was warmly welcomed by MGEN Ariel R. Caculitan PN (M), Commandant, Philippine Marine Corps. She was introduced to the PMC Organization and given a brief background on the Archipelagic Coastal Defense (ACD) program. One of the highlights of the day was the Wreath Laying Ceremony at the PMC Heroes Memorial Park where they paid tribute to all the men and women who have given their lives in the service of our country. It was a poignant and heartwarming moment for the new queen.

The visit to the headquarters would not have been complete without a visit to the firing range where Sgt. Gomez fired several types of firearms and skillfully hitting the targets. It can be said that with or without a crown, Gomez would be serving the country one way or another. Winning a crown, however, gave her a bigger platform to inspire people. When asked whether pageant or navy training was more difficult, she said.


“Let’s put it this way, when I have difficulty doing the pageant training my diversion is going to the headquarters. That’s my stress reliever and refresh myself. So when I go back to my pageant training, I’m good. My Naval Reserve family is really the ones who took the stress away from me during my pageant journey.” 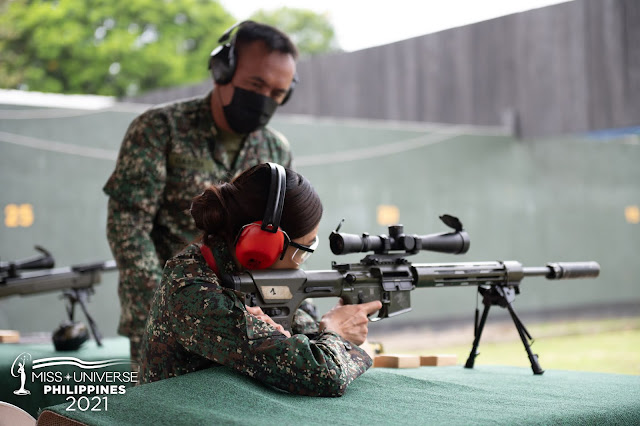 Interestingly, the host of this year’s Miss Universe Finals is a country that is no stranger to beauty queens who are in the armed forces. For many years, Israel has been sending representatives who themselves were part of the armed forces. Gomez is the first Filipina navy reservist to represent the country in Miss Universe. She will compete in December at Eilat, Israel in the hopes of becoming the country’s fifth Miss Universe
at October 12, 2021