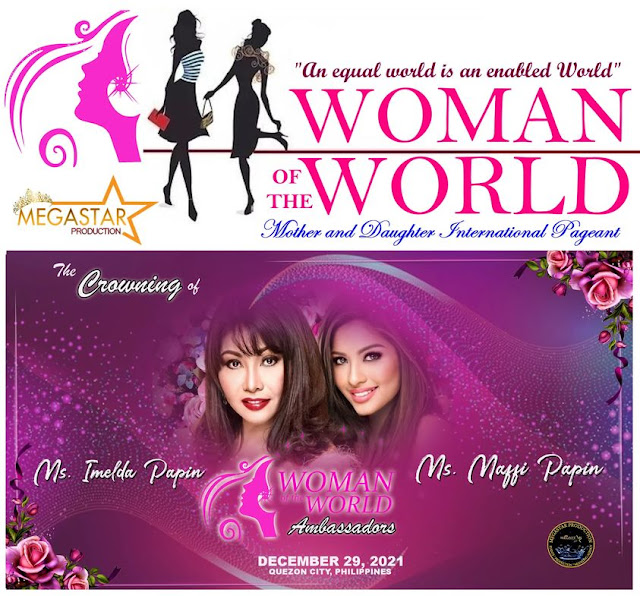 Megastar Production launches another one-of-a-kind pageant before 2021 ends.
Woman Of The World is a mother and daughter international pageant where the aforementioned gets to compete together. Both of them will be judged and scored together as one. This inaugural pageant is a brainchild of the “Mother Of All Pageants” - Mr. Ovette Ricalde. “I want to stage this pageant in time with the celebration of the International Women’s Day. This is my way of giving tribute to the best tandem this world has ever had, the mother and daughter team up. Each country from all over the world will be sending their mother and daughter representatives and both of them will compete as one in winning the title Woman Of The World 2022”, says Ricalde.
With the tag line, “An Equal World Is An Enabled World”, this pageant aims to gather more than 50 empowered mothers and daughters from all corners of the globe.
On December 29,2021, two of the Philippines’ pride will be crowned as Woman Of The World Ambassadors. The real mother and daughter tandem, Ms. Imelda Papin and Ms. Maffi Papin Carrion. These two accomplished and world renowned mother and daughter tandem will foster the advocacies of the organization which are all anchored towards women empowerment.
Imelda Papin has been a public servant since 1998. She was actually an undefeated Vice-Governor of Camarines Sur thrice. She is also a two time Most Outstanding Vice Governor of the Philippines (1998-2001, 2001-2004). In the music industry she is considered as the Asia’s Sentimental Songstress and Philippines’ Jukebox Queen for 47 years.
Maffi Papin on the other hand is a multifaceted performer, Eagle Queen Universe 2021 , Iconic Iron Lady of Women’s month celebration 2021 and Noble Queen International 2019. She started as a young singer on stage with her Mother who is a Superstar known internationally and a Hall of Famer and Politician .
Maffi holds several titles such as Respect: Noble Queen of the Universe Philippines-Bicol 2019 , Philippines Best Dressed Queen 2020 and Eagles Eco Tourism Global Queen USA 2020 . She is a recepient of the 2020 Golden Eagle Excellence Award for Heath and Beauty Advocate , U.S.A. Honorary Chairman and Humanitary Service Leader, The Iconic Woman Award by SDL UAE and by the government of Camarines,Sur Bicol that has passed a resolution being recognized as one of the Women Leaders of Camarines Sur “Tingong ng Kababaihan” “Voice of the Women”.
The crowning ceremony will be facilitated by Mr. Ovette Ricalde together with the reigning Mrs. Tourism Universe 2021, Hemilyn Escudero-Tamayo and Mr. World Noble King Ambassador 2019 Arnel Peña Colis and hosted by Mr. Onin Mas.
#FabPhilippines #WomanOfTheWorld2022 #megastarproduction #ImeldaPapin
at December 23, 2021