Quezon City Searches for its Queen 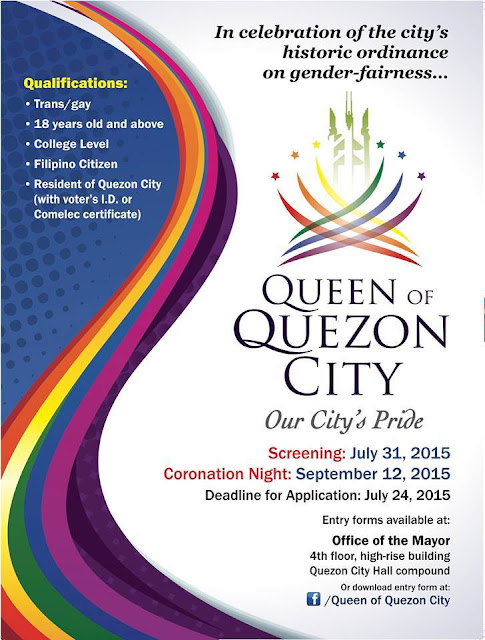 Quezon City sets the stage to highlight the contributions to society of talented and gifted gay and trans citizens through the city government's first ever search for the Queen of Quezon City. This is held in celebration of the city’s historic ordinance on gender fairness.
The pageant, open to all gays and trans who are at least 18 years old, is now accepting application forms from bonafide Quezon City residents who will best showcase the inherent talents and potential contributions of trans or gay citizens as equal and productive members of our society.

The Queen of Quezon City pageant brings attention to the comprehensive anti-discrimination policy on the basis of sexual orientation, gender identity of expression or ordinance #2357 of the city.  The ordinance is designed to eradicate discimination against lesbian, gay, bisexual, and transgender (LGBT) citizens in workplaces and the Quezon City community in general.
As such, the chosen queen should best embody the ideals of gender fairness and should be able to advocate it.

Other qualifications include a height of at least 5, 5”, proportional body measurement, college level educational attainment, physical and mental fitness, good moral character and good sense of social awareness.  Contestants must also be willing to sign a management contract in the event of winning any of the major awards.

Entry forms are available at the Office of the Mayor, 4th floor, high-rise building, Quezon City hall compound or at the official face book of account of the pageant, which is www.facebook.com/queenofqc.